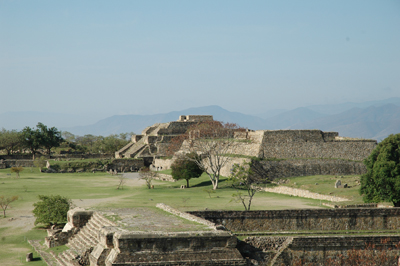 Lambityeco
12 miles from Casa Adobe
A short distance down the highway from Dainzu, this ruin was an important Zapotec city with houses, palaces and tables decorated with figures of gods and priests.

Mitla
18 miles from Casa Adobe
First occupied in approximately 500 BC, Mitla is located in the town of San Pablo Villa de Mitla. The center of Zapotec priestly power when the Spanish arrived, Mitla is known for its beautiful architecture. The ornate facades and monolithic columns suggest a sense of delicate aesthetics as well as engineering, geometry and astronomy.

Monte Alban
A few miles outside of Oaxaca (not within walking distance) Monte Alban is one of the earliest sites in Mesoamerica. Built on an artificially leveled mountain, it was a Zapotec center for almost a millennia. The site contains a ball court, astronomy observatory, multiple pyramidal complexes, civic buildings, tombs and some evidence of residential areas.

The easiest way to get to Monte Alban is by purchasing a round-trip ticket with one of the local companies that offer excursions. As an alternative, we suggest taking a taxi to Monte Alban in order to arrive as soon as they open since the temperature is cooler and there are no crowds. Once there, you can take a taxi back or catch the bus back into the city. To catch the bus, stand to the left of the entrance of the lower driveway—the one with the private buses—and simply wait for it to arrive.

Tlacochahuaya
6 miles from Casa Adobe
A Dominican temple constructed in the early 1500’s contains frescos painted with cochinilla (a dye made from insects that live on cactus plants) the individuals in the frescos have indigenous features. It also has a beautiful working two-man pump organ from the early 1600’s. When walking around the building, you’ll see stones carved with petroglyphs from the original, indigenous site that have been built directly into the church’s outer walls

Yagul
15 miles from Casa Adobe
First occupied between 500 – 100 BC by the Zapotecs, this large archaeological zone has a beautiful view of the surrounding valley and the second biggest ball court in the Americas. For birders, it is a spectacular place to see many of the local species.