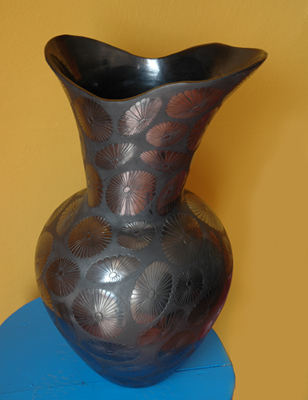 Barro negro pottery (“black clay”) is a style of pottery from Oaxaca, Mexico characterized by its color and designs, which can be either incised or on the surface. The use of black clay pottery dates as far back as Monte Alban but the unique sheen that now characterizes the style of pot was discovered in the 1950’s by Doña Rosa. A potter in San Bartolo Coyotepec, she discovered that burnishing/smoothing the clay with quartz gave it a high sheen after it was fired. Today, their are a number of potters in San Bartolo Coyotepec that use this method to make the coveted black pottery.

The now-famous black pottery is still made in San Bartolo Coyotepec, just outside of Oaxaca. Our favorite artists are Omar Fabian Canseco and family. While they create the more traditional potter styles–use of hand-building the clay and incising the pots with flowers and zapotec patterns— they also incorporate the use of symbology and pictures found on the caves that sheltered the earlier Zapotec tribes. This use of recent tradition mixed with ancient symbols has allowed them to create some pieces that are unique among the artists that create the barro negro pottery.

Stop by their shop and they will offer a tour if available.